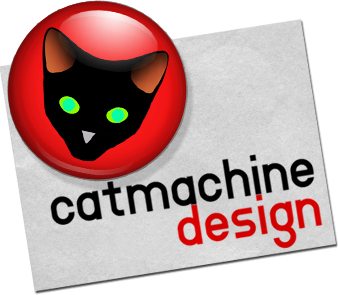 I can help you get the most out of your material to promote yourself online or in print.

If you're a creative needing to promote yourself or your projects online or in print, Catmachine Design can help you get the most out of your material, both visual and written.

Whether you're looking for a poster and flyer campaign, a brand new website or simply to have your current website brought up to scratch, I will ensure that you end up with something eye catching, attractive, accessible, readable and affordable.

Of course these days maintaining an online presence means far more than just keeping your web site up to date.

I can advise on the best way to make the most of the social media available - make sure you're not Tumbling when you should be Tweeting - and how to incorporate these new channels into your existing site.

I can write succinct, comprehensible copy for the web or advise you on how to do this yourself.

I can also deliver one-to-one training in a number of software packages to bring your own design skills up to date.

It's never too late to get plugged in.

The first Camden Fringe was a festival that took place in August 2006 at the Etcetera Theatre and included 57 performances by 22 acts over a 4 week period.

Chris had already worked with Camden Fringe organisers Zena Barrie and Michelle Flower for some time — designing the website and posters for their production company It's Alright For Some as well as for the Etcetera Theatre itself — and so Catmachine was involved in the design of publicity for the festival from the beginning. In 2006 this simply consisted of a two sided A5 flyer.

However since its inception the success of the Camden Fringe has steadily grown.

In 2007 another venue was added and the first iteration of the web site was launched, as well as the first A5 brochure. By 2008 a total of 301 performances took place across 3 venues, requiring an even more comprehensive brochure.

The Camden Fringe Ltd was incorporated as a limited company in January 2009. This coincided with a major redesign of the website and publicity material and the introduction of the first "pigeon mascot". Aside from the brochure, a series of posters and flyers were produced for display around the borough at all 5 venues where 399 performances of 120 different shows took place for which 10,600 tickets were sold. A back end database of artists, shows and venues allowed the website to reflect the most up to date programme as well as being used as the basis for the information in the now 32-page brochure.

This increase in scale continued into 2010. A redesign of the site and publicity material - not to mention a new pigeon - promoted an even larger festival, consisting of 625 shows at 8 venues across Camden. This was also the year when social media came into it's own for the fringe, with Twitter, Facebook, YouTube and other networking tools embedded and incorporated into the site.

2011's Mod Pigeon oversaw a change in the way that the Camden Fringe itself was organised. A special web portal was written which allowed performers to login to update their own publicity material, show dates and press information that would then be reflected on the live site and in the printed brochure.

Social networking and online interaction is of increasing importance and the Camden Fringe has a consistent, recognisable and friendly brand across all platforms it engages with.

Whether you have a specific task you need to perform or simply need to get up to speed on Photoshop, InDesign or other software packages (use the form in the contact section for queries) I can deliver one-to-one training to suit your needs.

Rates are £20 an hour - discounts available for sessions of more than two hours.

I can advise on the best way to use social media and help devise a strategy for your business or your own projects.

Catmachine is run by me, Chris Limb, a writer and designer currently based in Brighton and Hove (UK).

However, the nature of the internet means that I welcome enquiries from anywhere in the world.

We have your email and will read it shortly.